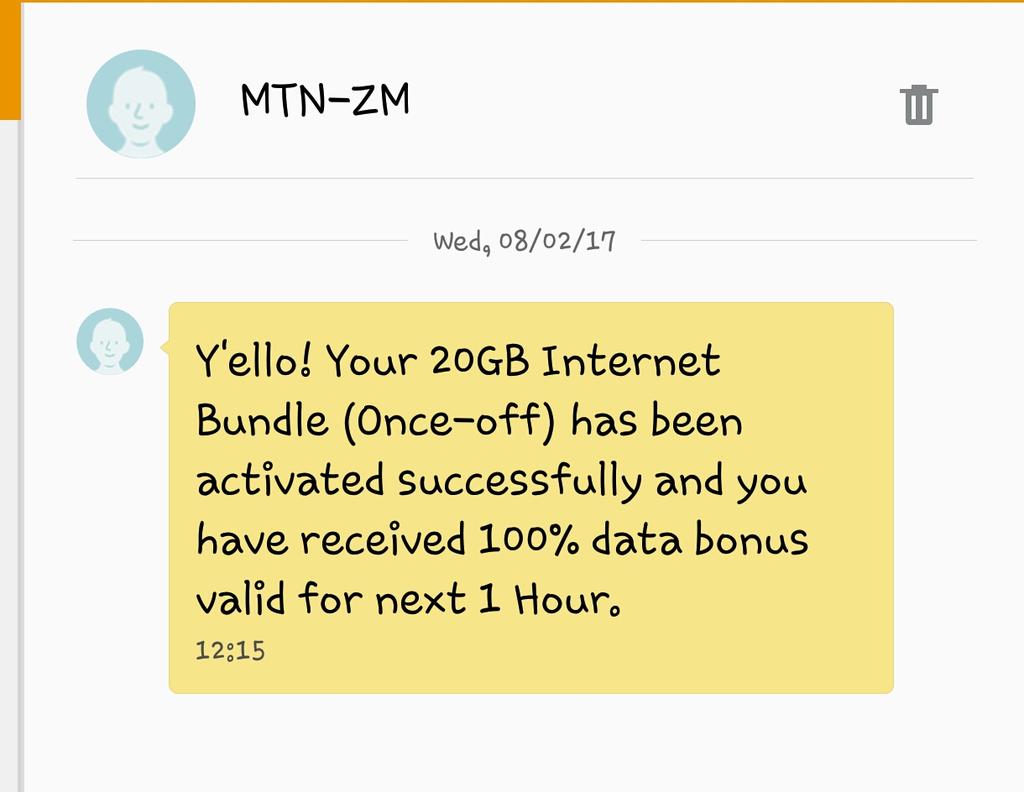 So we all like free things – well, not so free if you paid for something like data – so I was excited to receive a 100% bonus on my 20GB topup.

Elated is an understatement.

Then I saw the catch.

The end of the text message that delivered this awesome news said I only had an hour to use it. All 20GB of my bonus data. I went into data usage panic. What large files should I download? Who should I WhatsApp call? What new apps should I get?

The ridiculousness of this validity period for the gifted data prompt me to ask MTN Zambia on Twitter why they made it so short and I got this response:

Y’ello @sandichimpala, the bonus bundle is only valid for one hour so that you can have enough time to use the actual bundle purchased. MTN.

Is this an official answer, like, the team agreed on this? https://t.co/wiP2wrQqWI

with MTN Zambia adding on that one could use the bonus data to ‘update a device’. WTF! No really, you could update your WTF apps – WhatsApp, Facebook or Twitter…

@MaceWimbu You can use the 1 hour to update your device.

Someone had to ask this very logical question:

Because my device runs a 20gb version of android….. @sandichimpala. MTN are actually looking out for us ? https://t.co/nPmDZVcfXy

Ofcourse my Twitter folk agreed with how silly the length of time for that much data really is:

How does one use 20gb in an hour?? Zambian download speeds wouldn’t even allow a full brain upgrade, if such existed. Shame! https://t.co/xJucIorT0I

who they responded to with

@telferkndumba, The usage of the bundle is dependent on ones preference. Thank you

and then the criticism continues:

This is so ridiculous.. https://t.co/9mIw4zHmTi

If MTN wants to give people a little extra time before they start using their actual data bundle, how’s about a day or two? Hell, even a few days for the larger bundles, but no, 1 hour was the perfect timing it seems.

Techtrends is waiting on an official response from MTN Zambia on this reasoning, and by official I mean the CEO Charles Molapisi’s response as an email was directly sent to him. There’s also a Facebook Live chat tomorrow with Mr Molapisi focusing on #DataThatWorks (even if for only 60 minutes). I’ll ask this question again if there’s no response by tomorrow morning.

Get rid of your data problems once and for all

Mobile Apps That Connect You To The World Cup 2014