An analysis of GlobalData’s Telecommunications Influencer Platform, which tracks over 140 leading global Telecom experts and their discussions pertaining to emerging trends, pain areas, new fields of innovation and other popular areas on Twitter, has revealed Evan Kirstel, a B2B thought leader and technology expert, as the top influencer in the fourth quarter (Q4) of 2019.

Among the companies, Qualcomm emerged as the leading company based on the discussions driven by telecom experts, followed by Verizon and Huawei, respectively. The conversations on Qualcomm were led by Snapdragon Tech Summit, which was hosted by Qualcomm in Dec 2019 in Hawaii and announced its next-gen flagship Snapdragon 865 chip. 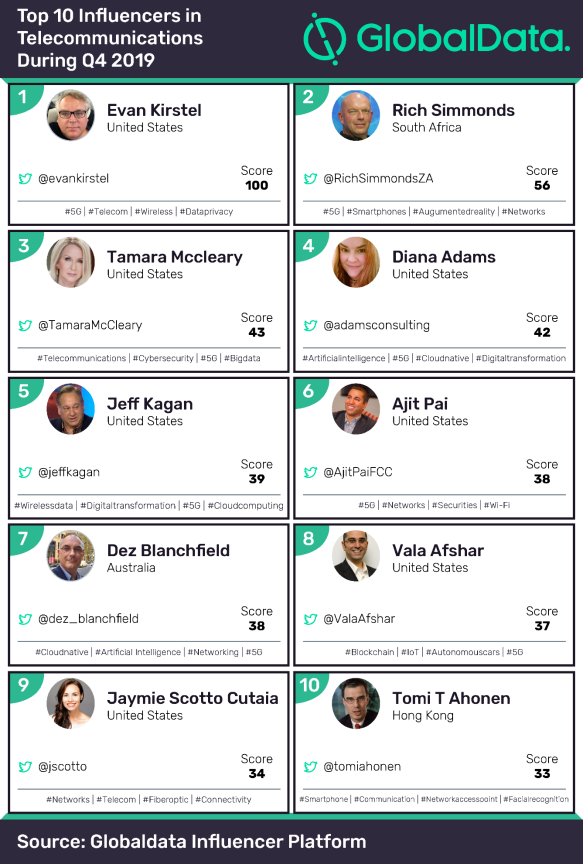 Among the top trends, ‘5G’ emerged as the leading trend in Q4 2019, followed by ‘MWC 2019’, ‘IoT’ and ‘Cybersecurity’,respectively. The conversations on ‘5G’ were driven by the discussions among the telecom experts  about the future of 5G technology and its application in telecom, automotive and smart cities.

What was shared at TEDxLusaka